Review: As You Wake (In Your Dreams, #2) by Amy Martin

Spoiler warning! This is the 2nd book in the In Your Dreams series and so this review will contain spoilers from the first book. If you haven't read the 1st book then you can read my review of In Your Dreams here instead. You have been warned! 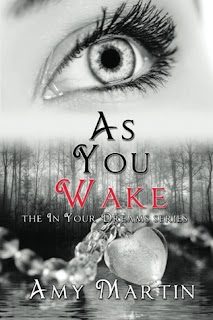 Source: Received free copy from author in exchange for an honest review

Plot Summary (from Goodreads):
Zara "Zip" McKee and Kieran Lanier thought they had put the threats from Kieran's past behind them in the first installment of the In Your Dreams series. But when danger comes for them once again, Zip, Kieran, and their families find themselves on separate summer road trips that none of them had anticipated. When all paths converge in North Carolina, the two families are forced to deal with each other and the secrets they've kept out of love and fear.

My Review:
I really enjoyed In Your Dreams so I've been eagerly anticipating this book! And I was very fortunate to receive a copy from the author a few days before the release. As You Wake picks up with Zip and Kieran still fearing they may be in danger and with Kieran strill having to deal with his visions.

There are so many things I loved about this book! It's one of those reviews where I don't really know where to start. Firstly, there was plenty of little bits of recapping weaved really nicely into the story which I always like, as I have a memory like a sieve and can't always remember little details from previous books in a series. In As Your Wake it was done perfectly and straight away I was back in that world. I think I enjoyed it more now Kieran's problem is well established, whereas in the first book there was still a lot of figuring out what was wrong with him. It meant I was able to completely lose myself in the story.

Okay so I really love Kieran and Zip's relationship. They're so sweet together! And in this book they have a lot of obstacles to deal with and it was great seeing how they tackled with them. Not only was it tricky knowing that they both could still be in danger with people possibly still out there wanting to get to Kieran, but they have all those teenage issues to deal with when it comes to their relationship. How are they going to deal with Zip going away for the summer? How will they cope when they're off at college? And the things like saying I love you and taking their relationship to the next level. I think they're probably one of the best written couples I've come across because everything just feels so natural with the two of them.

One of my favourite parts of As You Wake was definitely Kieran's sister Kayla. I thought she had great potential in the first book but she was just brilliant in this one! I especially liked the road trip scene where we get to see her bond more with Zip. She's just so honest and brutal but in a caring way, and I found myself really enjoying the scenes where she took more of a focus. I liked that we still get to see what's going on in her life as well and that she was able to share things with Zip.

There was definitely plenty of tension and suspense throughout As You Wake. I was constantly wondering what would happen and I could really feel Zip and Kieran's worries. I liked that there were some great characters to try and figure out as well, both people from the past and some great new characters who you had to decide whether to trust or not.

It really did have a bit of everything, from romantic relationships to family relationships, high school worries and a little bit of mystery. It delivered in all departments and I thought it was kept fresh by the fact we got to see characters in different physical settings. The pacing was spot on and I couldn't put it down. Every time I got to the end of a chapter there'd be another great cliffhanger that meant I just couldn't stop! And the climax was really exciting and made all that build up worth it.

I enjoyed this book even more than In Your Dreams so I can't wait to read the next book! If, like me, you've been waiting to read the sequel then wait no longer. You won't be disappointed!

Rating: 5*
Books like this: Shift by Em Bailey, Justice by Jade Varden

Email ThisBlogThis!Share to TwitterShare to FacebookShare to Pinterest
Labels: 5*, Amy Martin, As You Wake, contemporary, In Your Dreams, Love, May 2013, Series