Review: In Your Dreams by Amy Martin 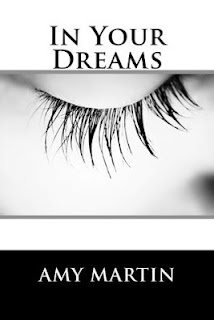 In Your Dreams by Amy Martin
[Goodreads page]

Plot Summary (from Goodreads):
Sixteen-year-old Zara "Zip" McKee lives for three things: basketball, books, and bailing out of tiny Titusville, Illinois, where the junior high and high school are in the same building and everyone's known everyone else since birth. But when Kieran Lanier moves to town and passes out on her desk on his first day at school, Zip's life gets complicated in a way she never dreamed.

Kieran has narcolepsy, and although he sometimes struggles to stay awake, he has no trouble capturing Zip's heart and trusting her with his most guarded secret--he sees bits and pieces of the future in his dreams.

My Review:
I was sent a copy of this book by the author and after reading the plot summary I was completely intrigued! In Your Dreams tells the story of Zip, who ends up befriending the new guy Kieran when he starts at her school. Kieran has narcolepsy, and when Zip witnesses one of his attacks she soon becomes someone he can confide in, and there's a lot more to Kieran than meets the eye!

I was completely hooked from the first couple of pages of this book. I really loved the writing style and Zip was a character I was drawn to instantly. She's smart and great at basketball, and I just loved her voice throughout the book. Then we're introduced to Kieran and his sister Kayla. Kieran was a totally lovable guy character and I really enjoyed his developing friendship with Zip. I thought Kayla was a fascinating character, too, and she really added some depth to the story. She's been the one that always looks out for her brother so when Zip gets close to him, there's some jealousy there which added a bit of drama. I found the exploration of Kieran's narcolepsy really interesting. I don't think I've ever read anything that explores that condition.

As the book goes on we learn Kieran has another secret. I was expecting it to turn into a fantasy/paranormal story at that point but it didn't, and that's something I really loved about this book. Instead of using magic the book sticks to scientific and medical reasons to explain what's going on. I won't go into it in too much detail but it meant the book kept that contemporary/realistic feeling which I really liked. It was a completely fresh approach and made it stand out from a lot of other books I've read.

The second half of the book focuses on more secrets being revealed. That added a mystery element to the story which kept my attention. I sometimes got a little confused with the back story and had to re-read a few sections, but I think that was just down to the upping of the pace from the first half of the book. When the action kicked in towards the end I couldn't put the book down!

There's a sequel planned for this book and I'm intrigued to see where it ends up. I'd really recommend it book if you're looking for something a bit different!

Rating: 4*
What to read next: The as yet untitled sequel to In Your Dreams will hopefully be released in 2013
Books like this: Justice by Jade Varden