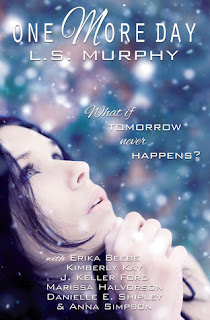 One More Day by L. S. Murphy and Various Authors

Source: Received free advance copy from the publisher in exchange for an honest review. Thanks J. Taylor Publishing!

Plot Summary (from Goodreads):
What if today never ends?

What if everything about life—everything anyone hoped to be, to do, to experience—never happens?

Whether sitting in a chair, driving down the road, in surgery, jumping off a cliff or flying ... that's where you’d be ... forever.

In One More Day, Erika Beebe, Marissa Halvorson, Kimberly Kay, J. Keller Ford, Danielle E. Shipley and Anna Simpson join L.S. Murphy to give us their twists, surprising us with answers to two big questions, all from the perspective of characters under the age of eighteen.

How do we restart time?

How do we make everything go back to normal?

The answers, in whatever the world—human, alien, medieval, fantasy or fairytale—could,maybe, happen today.

What would you do if this happened ... to you?

My Review:
The reason I decided to accept a review copy of this book was down to the fact I don't read many short stories. The whole concept and idea of the collection sounded really interesting, and I liked the idea of a group of stories with a common theme running throughout. One More Day features several shorts all based around the idea of time standing still. For this review I thought I'd recap each story and give my thoughts on it.

First up was Time Piece by Anna Simpson which follows Sadie as she is joined by her future self to try and destroy a time machine causing time to loop itself over and over again. This was probably one of my favourite stories because it was so action packed. The writing was really beautiful and the idea behind the story reminded me a lot of All Out Yesterdays by Cristin Terrill, so if you loved that book then I think you'll appreciate the ideas in Time Piece. I struggled a bit with some of the transitions when time jumped back on itself, but overall this was still a highlight of the book for me.

Next came Dark Rose by Marissa Malvorson which tells the story of Scarlett who is sitting in an exam when time seems to freeze around her. Whilst she freaks out and goes outside to find out what the hell is happening, she comes across Letta, a version of herself from a parallel universe, in the midst of a battle to stop the Dark Rose from destroying the world. I loved the idea of parallel universes colliding and addressing characters who exist alongside each other. There was plenty of action and I loved the build up and the climax of the story which felt very complete.

Dragon Flight by J. Keller Ford was another highlight of the anthology. Amber finds herself stuck on a roller coaster, the only person still concious and moving as time stands still. When she finally escapes the roller coaster car, she discovers the real reason she's there in the first place. It's hard to go into this one too much without spoiling but I thought it was a really cool idea and this story will really appeal to fans of technology and sci-fi. Don't be put off by the title - it's not fantasy!

The 13th Month by L. S. Murphy takes on the idea of the apocalypse being imminent. Nixon's brother Jackie is obsessed with the end of the world and ends up on weird websites with crackpot theories. Only one night, one particular theory comes true and Nixon finds himself fighting for his life. I really liked the survivial element to this story as Nixon struggles to stay alive during the apocalypse. I also loved the relationship between Nixon and brother Jackie and the gritty, intense feel of the story.

But it's not all sci-fi! Sleepless Beauty by Kimberly Kay gives a fairy tale twist to the anthology. Princess Clarissa has pricked her finger causing her to fall into a cursed sleep. Aerisa is a servent who is left to try and break the curse by tracking down Clarissa's ex-boyfriend Edwin to deliver the kiss that could wake her. But Aerisa has her own feelings to deal with when it comes to Ben. This was a really sweet love story with that really made my heart swell and provided a refreshing contrast to some of the other stories.

Stage Fright by Erika Beebe follows Hannah who is performing in a play when time freezes and she finds herself encountering boys she's only dreamt about. I found some moments in Stage Fright a little confusing and it took a while to get to the point, but towards the end when the ideas started to come together I really enjoyed it. I loved how it portrayed the power of imagination and dreams coming true and it felt really uplifting.

A Morrow More by Danielle Shipley took high fantasy twist as we enter the world of the Inkborn and meet Raeve, servent of and hopelessly in love with Inkborn Lorrel. When times stops, Raeve discovers there is more to this world than meets the eye. Again, this is one that is hard to explain without spoiling, but it's a very clever idea and plays on the idea of imagination and writing stories. Once I knew what was happening I really enjoyed the concept, but the beginning of the story made it a bit hard for me to understand at first with all the language and terminology. Still, it was an idea that really worked.

Overall I really enjoyed this collection of stories. I liked the sci-fi feel to a lot of them and how they all played with the idea of imagination, something I think a lot of readers will really appreciate. I'd definitely be keen to read more by each of these authors as the writing was of a high standard throughout. For anyone looking for a great anthology or maybe someone who doesn't read short stories very often but would like to, this is a great place to start.

Rating: 4*
Books like this: All Our Yesterdays by Cristin Terrill, Between the Lines by Jodi Picoult and Samantha van Leer, Prom Nights From Hell by Various Authors