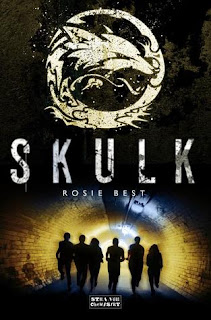 Source: Received free copy from the publisher via NetGalley in exchange for an honest review. Thanks Angry Robot/Strange Chemistry!

Plot Summary (from Goodreads):
When Meg witnesses the dying moments of a shapeshifting fox and is given a beautiful and powerful stone, her life changes forever. She is plunged into the dark world of the Skulk, a group of shapeshifting foxes.

As she learns about the other groups of shapeshifters that lurk around London – the Rabble, the Horde, the Cluster and the Conspiracy – she becomes aware of a deadly threat against all the shapeshifters. They must put aside all their enmity and hostility and fight together to defeat it.

My Review:
I'd seen Skulk mentioned on a couple of blogs so when I saw it was available to request on NetGalley I couldn't resist, and kept my fingers crossed! Skulk tells the story of graffiti artist Meg, who stumbles across a fox one evening who shifts into a man before her eyes. Soon she is drawn into the hidden world of the Skulk, a group of shape-shifting foxes.

I've read a lot of shape-shifting novels, usually surrounding wolves or cats, so I was intrigued to see a different take on it! This book not only deals with foxes but with rats, ravens, spiders and butterflies. What was interesting was how the book starts out as this gritty urban fantasy. It's set in London and I loved that location. It provided so much scope to explore the city and I could really get a picture in my head for the locations. Then towards the second half of the book, the book delves into a more magical side of it which sort of shifted the tone. I loved the history of the Skulk and the other groups, and how there's lots of tradition and magic at play.

The most instantly likable thing about this book was definitely Meg. She's artistic and expresses herself through graffiti, and I love how the book has chosen to use that as an art form rather than something frowned upon. The descriptions of the artwork that Meg has come to admire and look up to, such as that of her favourite graffiti artist E3 really shows how passionate these people are and what talent they have. And you could feel that passion coming from Meg.

What also really endeared me to her was that she is completely grounded and kind, despite the fact she is surrounded by pretty horrible people. Her mother is an MP who is determined her daughter should act and look a certain way, and the way she treats Meg is just plain cruel. Seeing Meg trying to battle against that whilst all the time remaining the same likable self just left me really rooting for her. Then there's her friends at school who are the sort of typical popular types. Meg is from a wealthy background yet she's nothing like the snobby girls she has to go to school with. She has to deal with a lot of peer pressure from her friends as well, for example when it comes to the pressure to have a boyfriend or sleep with a guy. I liked that she was different. I love it when you can see yourself being friends with a character, and that's how I felt about Meg.

Once Meg breaks away from her old life and integrates herself with the Skulk, we meet some great new characters. I really liked Addie and Blackwell who sort of take Meg under their wings, plus Mo who appears slightly later in the book. At times there were maybe a few too many characters to get my head around and by the end I was struggling a bit with who was who. I'm not good with lots of characters!

There were plenty of fast paced action scenes and a great underlying mystery surrounding a magical stone that kept he pace moving and stopped my attention from wavering. The writing was snappy and vivid and had me really wrapped up in the setting. I loved the unique feel to Skulk. It didn't feel like any other book I'd read, and I adored just how British it was. I think the first half was slightly more enjoyable than the second half for me, as I preferred the gritty urban fantasy side of the story, and later on in the book it became more complex. The ending of the book certainly suggests that there's more to the story and I hope it's continued into a series. I think there's so much potential for the world Best has created and those brilliant characters.