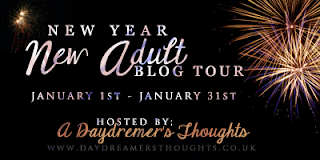 Today I'm super excited to be part of the New Adult Blog Tour, hosted by A Daydreamer's Thoughts. Be sure to check out the full schedule and visit the other tour stops! Read on for my review of After Math and an interview with the Denise Grover Swank, plus a giveaway and your scavenger hunt clue! 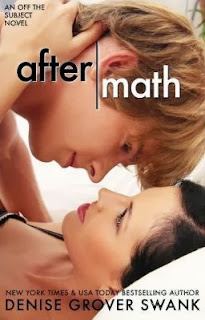 Source: Received free copy from the author in exchange for an honest review as part of the NA blog tour


Plot Summary (from Goodreads):
Scarlett Goodwin’s world is divided into Before and After.

Before she agreed to tutor Tucker price, college junior Scarlett was introvert, struggling with her social anxiety and determined to not end up living in a trailer park like her mother and her younger sister. A mathematics major, she goes to her classes, to her job in the tutoring lab, and then hides in the apartment she shares with her friend, Caroline.

But from her first encounter, she realizes Tucker isn’t the person everyone else sees. He carries a mountain of secrets which she suspects hold the reason to his self-destructive behavior. But the deeper she delves into the cause of his pain, the deeper she gets sucked into his chaos. Will Scarlett find the happiness she’s looking for, or will she be caught in Tucker’s aftermath?

My Review:
After Math tells the story of Scarlett, a high flying maths student at Southern University, who is called in to tutor the university's star soccer player Tucker Price.

Firstly, I have to say how much I loved the focus on education in After Math. One of the things I love about NA is that it gives the chance to explore the pressures eighteen to twenty-five-year-old adults face, and college is probably the biggest one. It felt so refreshing to see Scarlett, an academic character, really valuing her studies and seeing her ambitions of where they will take her, as well as juggling the pressures of student life.

I also loved how different the romance felt. Scarlett and Tucker's journey is a slow one, and they spend a lot of time getting to know each other. It was refreshing to see time dedicated to that early part in a relationship and I enjoyed seeing the gradual development of feelings for each other. I think people have perceptions that NA is all about sex, so when I saw that I was 50% into the book and there'd been no steamy sex scene yet I was pleasantly surprised!

I adored Scarlett as a main character because I could relate to her. She's shy and anxious and would rather stay at home studying than go out partying like her friends. Whilst she goes on a journey throughout the book and does push herself out of her comfort zone, she never does anything reckless or out of character, and I loved that she stayed true to herself and proved you don't have to go wild!

I also really fell for Tucker. I think popular guys (and girls for that matter!) get a bad rep in books, and Tucker was just a really nice genuine character. He has a reputation and Scarlett starts out sceptical, but as they get to know each other, his vulnerability comes out and I loved delving into his character more. There's a lot that isn't revealed about him straight away which made for some great plot twists towards the end of the book. What I loved most was how it just seemed to be a healthy, genuine relationship between him and Scarlett. They're two really nice people who fall for each other!

I think my favourite part of the book was the first half where Scarlett is falling for Tucker and deciding what to do about it, but the second half has some really sweet and gripping moments.

This is definitely a book I'll be recommending to NA fans new and old, and especially those new to the category who need a taster! I think captures the trials of being a twenty year old brilliantly, it's a cute love story and it has some fantastic characters.

Rating: 4*
What to read next: Redesigned by Denise Grover Swank, book two in the Off the Subject series
Books like this: Suddenly Royal by Nicole Chase, Dare You To by Katie McGarry


Hi Denise! Thank you for answering my questions. I loved After Math! I thought it was so exciting to read a NA novel that really focused on college and education, as that's such a huge part of life at that age. Scarlett, the main character in After Math, is quite academic. How much research did you have to do to get inside her head and understand the subjects she studies?


I know nothing about advanced math. I barely got a C in high school Algebra 2. (Although that can be attributed to a bad teacher. I got an A in College Algebra.) My family thought it was hilarious that I would attempt to get into the head of a mathematics major. So I interviewed a couple of female math majors. One was a junior and the other was a sophomore. I wanted to know why they chose their majors and what their courses were like. I also studied the UMKC course catalogue to get an idea what other courses Scarlett would take concurrently.


I absolutely loved Tucker! (Scarlett's love interest in After Math). Who was your favourite character to write?


In hindsight, I wish I had included Tucker’s POV in After Math. He’s a very complex character. It never would have worked to write Reed’s in Redesigned because I really liked the reader finding out his secrets along with Caroline. I’m currently writing Business as Usual, the third book in the Off the Subject series and I’m including Ben’s POV, which is so fun to write.
But my favorite character of all time? That’s hard. I guess I’d have to pick Rose from my Rose Gardner series.


I found myself relating a lot to Scarlett as she'd rather stay in and study than go out and party. Are you more of a staying in or going out person?

I like to go out from time to time, but mostly I’m a stay at home girl.

How would you define New Adult as a category?

I classify New Adult as that in between stage between high school when you’re living under your parents’ roof and rules, and full-fledged adulthood. Although I could argue that many of us never reach the later.

For those new to New Adult, what books or authors would you recommend? Who are your favourite NA authors?

What inspires you when it comes to your writing?

Everything. I literally get ideas from everything and everywhere. Sometimes an off-hand statement can spark an entire series. My Rose Gardner series sprang from me telling my son it would be fun to have a character who worked at a DMV.

What projects are you currently working on? Do you have more NA novels in the pipeline?

I’m working on Business as Usual, the third Off the Subject book. Then I start the third Curse Keepers book, a new adult urban fantasy series.

Thank you so much for answering my questions!

Thank you for having me!

About the Denise Grover Swank: New York Times and USA Today bestselling author Denise Grover Swank was born in Kansas City, Missouri and lived in the area until she was nineteen. Then she became a nomadic gypsy, living in five cities, four states and ten houses over the course of ten years before she moved back to her roots. She speaks English and smattering of Spanish and Chinese which she learned through an intensive Nick Jr. immersion period. Her hobbies include witty Facebook comments (in own her mind) and dancing in her kitchen with her children. (Quite badly if you believe her offspring.) Hidden talents include the gift of justification and the ability to drink massive amounts of caffeine and still fall asleep within two minutes. Her lack of the sense of smell allows her to perform many unspeakable tasks. She has six children and hasn’t lost her sanity. Or so she leads you to believe.

You can find out more about Denise and her other books at: www.denisegroverswank.com.