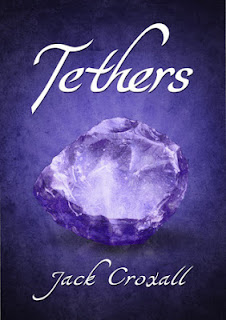 Plot Summary (from Goodreads):
Karl and Esther have spent almost every day of their thirteen years in the quiet market town of Shraye. Stifled by their rural surroundings and frustrated by their unfulfilled ambitions, they find the allure of the journal’s mysterious pages impossible to ignore. The book seems to be beckoning them away from Shraye, away from their homes and towards the coast where an unsolved disappearance has set in motion a dark chain of events.

The voyage the teenagers soon find themselves undertaking is one of desperate importance and true peril; it will change the way they see the world, and each other, forever.

My Review:
I grabbed Tethers as a free Kindle download a few weeks ago because it looked like something a bit different! The book tells the story of Karl and Esther, who come across a mysterious notebook. When they discover their names appear in the book, they end up swept up in an adventure to discover what it all means.

I can honestly say after finishing it that Tethers was such a breath of fresh air! It was such a fun, likable story yet it had so much going for it. I'll start with the characters who were pretty awesome. I adored Esther and Karl. The book is told in third person from Karl's point of view and I really liked that, because he was the perfect person character to carry the story. He's clearly bright and has a great future ahead of him with an almost guaranteed spot to train as a teacher when he finishes school, but his longing for adventure and exploring the world overtakes him. I think so many of us can relate to his wish to want to get out there amongst the action. Esther was really interesting as well and was the perfect character to balance out Karl. They made a really great team and she was so feisty!

I liked that they were slightly younger characters, too. Karl and Esther are thirteen and they still have that childlike innocence about them. There was also a brilliant relationship between the adult characters and the two kids. They were treated like equals throughout the whole adventure, something which really endeared me to those older characters.

I really enjoyed the writing style of Tethers. Everything was so beautifully described that from the beginning I could really envisage everything that the characters were seeing. I particularly liked how the characters spoke and the fact that they're local accent was reflected in their speech. I'm such a stickler for accurate sounding dialogue and in this book it was spot on! I could really hear the characters voices as I read.

Tethers is really a fantastic adventure tale and anyone looking for a bit of escapism should definitely check it out. I really got carried away with Karl and Esther as they travel across the country to try and get to the bottom of what's written in the notebook. That mystery element was really impressive as well. I loved all the twists and turns and revelations. There was so much attention to detail as well, and things I didn't think were that relevant at the time suddenly become linked to the plot in such a clever way!

I think the only thing that took a bit of getting used to with this book was how a lot of the details about what's happening have to be relayed from the older characters, who hold the answers, to Karl and Esther. There would sometimes be quite long conversations where I just couldn't wait to get back to the action! But there was plenty of action to make up for it, especially at the climax of the story.

Tethers hooked me in with a great prologue and left me hanging with an teaser of an epilogue! This is the first book in a planned trilogy and needless to say I can't wait to find out what happens. I think there's huge potential for this story and I can't wait to be reunited with those characters and set off on another adventure!

Rating: 4*
What to read next: Tethers is the first book in a planned trilogy
Books like this: Sky Song by Sharon Sant