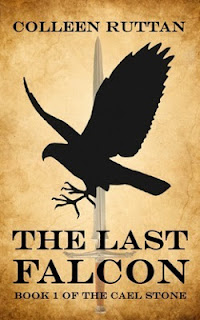 Plot Summary (from Goodreads):
Erynn Taylor was fourteen when she witnessed the brutal murder of her father. She should be dead, too, she knew that. But a reclusive golden dragon swooped down upon the scene—scattering her attackers and sparing her life, but ultimately denying her justice.

Two years later, Erynn’s attackers ride boldly into her kingdom for a visit with her king. But her elation at the nearness of justice turns to anger and then fear as she learns there is more to this visit than meets the eye—a conspiracy that threatens the entire kingdom—and that it just might bring her the death she so narrowly avoided. Erynn wants justice…but does she want it badly enough to die?

My Review:
I won this book from Goodreads in their first-reads giveaway, and it's been sat on my shelf for a while now. I've been putting it off partly because I was behind on books, and partly because it's fantasy and YA fantasy is a genre I've really struggled to get into. As soon as I started reading this book I regretted not reading it sooner!

The Last Falcon follows Erynn, who after losing her adoptive mother to illness and her adoptive father to murder, ends up working for the king. When the Galians arrive, things become uneasy and it's clear both Erynn and the king may be in danger.

I loved this book, and I'm so relieved to say that! The writing completely drew me in and where a lot of fantasy can be quite dense, this was completely readable but still had that intricate weaving of the world and it's characters. It had dragons, elves and kings and queens which made for a really exciting, imaginative tale and I just loved getting wrapped up in the story! The castle setting reminded me a bit of the Song of Ice and Fire books which I love, but which are definitely not YA, so it was great to have a format I loved in a genre I loved.

I really liked Erynn's character and how she came into her own throughout the story. When we first see her she's just lost her father, and seems vulnerable and lost. Later on in the story she has to be strong and fight for survival, and she really develops through her experiences. I liked her friendship with Adena and the loyalty she showed her.

The title of the book refers to the act of falconry which is seen as a threat throughout the book. Suddenly letters aren't being sent and falconers are being killed. I thought that was a really nice touch and a good backbone to the story. It also helped highlight the suspicion which runs throughout the story. There are plenty of horrible characters who are up to something which helped keep me completely hooked.

My only flaw and the reason I'm giving it 4* was just because I struggled to keep up with some of the connections between characters, but that's a personal thing and I often struggle with books where there are lots of characters and things to remember.

Overall I have a great deal of praise for this book because it's restored my faith in a genre I thought I would never be able to like! A really fantastic book and one I'd definitely recommend. This is the first book in the Cael Stone series so hopefully there's more great things to come!