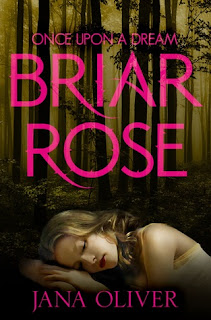 Plot Summary (from Goodreads):
For Briar Rose, life is anything but a fairy tale. She's stuck in a small town in deepest Georgia with parents who won't let her out of their sight, a bunch of small-minded, gossiping neighbours and an evil ex who's spreading nasty rumours about what she may or may not have done in the back of his car. She's tired of it all, so when, on her sixteenth birthday, her parents tell her that she is cursed and will go to sleep for a hundred years when the clock strikes midnight, she's actually kind of glad to leave it all behind. She says her goodbyes, lies down, and closes her eyes . . . And then she wakes up. Cold, alone and in the middle of the darkest, most twisted fairy tale she could ever have dreamed of. Now Briar must fight her way out of the story that has been created for her, but she can't do it alone. She never believed in handsome princes, but now she's met one her only chance is to put her life in his hands, or there will be no happy ever after and no waking up.

My Review:
When I saw I'd won a copy of Briar Rose I was really excited. I love the idea of fairy tale retellings and I was won over by that gorgeous cover. Briar Rose is a twist on sleeping beauty, and tells the story of Briar who is cursed to die on her sixteenth birthday. When she falls into a deep sleep she ends up in a different world, whilst her friends on the outside must help save her.

I struggled from the beginning of this book. I found the writing a bit hard to get into. It was kind of over-descriptive and didn't flow too well for me. There was lots of exposition about unimportant stuff like the history of the town and Briar's classmates, but when it came to the world building and the establishing of the plot stuff was just thrown in. Like for example the curse Briar discovers is placed on her. She finds out about it and within a few short hours has accepted it completely. As a reader, I was still struggling to get my head around the ridiculousness of the situation. It just felt like Briar should have questioned things a bit more. I ploughed on through the first one hundred pages and that was when I had to stop and put it down for a while. It wasn't the writing that had put me off, but I just wasn't connecting with the book and couldn't lose myself in the story.

There were a few problems in those first hundred pages. Firstly, I found the number of male love interest characters off-putting. We're introduced to Pat, who's the good looking one Briar has a crush on, as well as Joshua who is the nice kind boy but who Briar is forbidden from seeing because their parents don't get on. Then Briar's ex-boyfriend Mike thrown into the mix and I had some serious problems with scenes surrounding him. Briar spots him at a party where the following is written:

"The laugh belonged to her ex-boyfriend and it took her only a few seconds to find him near the bonfire, his arm round a tall red headed girl clad in a micro-bikini." - page 42


"Briar checked the girl out and found that she wasn't that special: her legs were short, her neck too long and her hair needed serious help." - page 42

"Mike had accused her of being a stupid kid, which in guy speak meant that she hadn't put out. From what she'd heard, his new girlfriend didn't have that problem." - page 43


These few quotes made me absolutely rage. Not only is briar being a complete b****, but it's the first time I've really understood the term "slut shaming". Why is this girl being judged because she dares to wear a bikini and have sex? Does that make her a horrible person?!

The guy drama doesn't end there. When Briar enters the fantasy world a bit later on we're introduced to Ruric, the male character who shows her around. I just didn't like any of the guys enough to become invested in what happened. Joshua seemed like the nicest but I just could not get my head around the whole forbidden friendship thing. It wasn't actually cleared up until very late on the book by which point I had given up caring.

I waited a few weeks before picking up the book and powering through so I could finish it. I think if I was the kind of person who could DNF books (did not finish) then I would have. My problem was that I just didn't enjoy it. The story didn't capture my attention at all and I found myself growing bored. I didn't really like the fantasy world the majority of the book takes place in. It's all set around one town which felt very restricted, and I didn't really get enough world building to be able to understand what was happening and why.

Back to the writing, and the book is written in third person, mostly from Briar's perspective. When she falls into the sleep we get to see chunks from Joshua's point of view. There are also a few chapters written from Ruric's perspective as well. Whilst the book was written in third person, you would get the occasional  sentence in italics which was a first-person thought from a character as a sort of glimpse into their head and what they're thinking. I don't really think they added anything and by the end of the book they were starting to bug me a little bit.

I think the main disappointment for me was just that the book couldn't hold my attention. I would find myself skimming over paragraphs and by the end I just wasn't really fussed about what would happen. The only time I really felt anything was during that scene with Briar's ex-boyfriend and all that did was make me angry. I didn't care about the story or the characters beyond that.

It's possible that people with a more detailed knowledge of fairy tales might be able to pick up on more of the references than I did and be able to enjoy the fantasy elements. I've heard the author's other series is really good and so although I didn't enjoy Briar Rose, I'd still considering seeking out books in her Demon Trappers series. This book just wasn't for me in the end.

Rating: 1*
What to read next: Forsaken by Jana Oliver
Books like this: Cinder by Marissa Meyer, Beautiful Creatures by Kami Garcia and Margaret Stohl