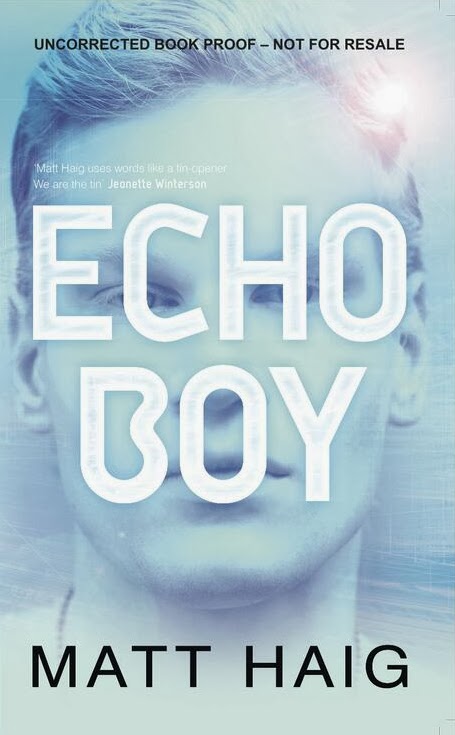 Source: Received free copy from the publisher via NetGalley in exchange for an honest review. Thanks Random House!

Plot Summary (from Goodreads):
Audrey's father taught her that to stay human in the modern world, she had to build a moat around herself; a moat of books and music, philosophy and dreams. A moat that makes Audrey different from the echoes: sophisticated, emotionless machines, built to resemble humans and to work for human masters.

Daniel is an echo - but he's not like the others. He feels a connection with Audrey; a feeling Daniel knows he was never designed to have, and cannot explain. And when Audrey is placed in terrible danger, he's determined to save her.

THE ECHO BOY is a powerful story about love, loss and what makes us truly human.

My Review:
I've read one book of Matt Haig's before (The Radleys) which I really enjoyed, so I was keen to check out his new YA offering. Echo Boy follows Audrey, the niece of a powerful businessman who creates Echos - robots designed to serve humans.

There was plenty to enjoy about Echo Boy. It definitely appealed to the sci-fi/post-acpocalyptic fan in me! The story is set in 2115 in a word dominated by advance technology, particularly the Echos. I liked how the author has posed a lot of questions about whether the technology has gone too far in Audrey's world.

The book is told from both the perspective of Audrey and Daniel, a prototype Echo who is a lot more human than other robots. Their entries take the form of "mind logs" implying a kind of diary journalling their experiences, but it didn't really feel like reading a diary. I think it was more a way to tie in the storytelling to the world. I liked the alternating points of view, and I really loved getting an insight into Daniel. His character was a real highlight for me. The two characters develop a bond throughout the book and I liked that they could both identify as being different, with Daniel standing apart from Echos, and Audrey being an orphan who doesn't fit in with her new family.

Whilst the story had enough to keep me interested, I spent a lot of my time reading Echo Boy feeling a little disappointed. I love this genre of YA, and yet I think that was the downfall of this book. Not a lot of it was original. The technology was interesting, but I just felt so much of it had been done before. Every time a new piece of terminology was introduced I would find myself questioning where I had read it previously and getting that feeling of de jav u. It may have stood out a bit more a few years ago, but it just felt a little bit dated now there are so many similar novels out there that I enjoyed a lot more.

I had a few problems with the pacing as well. The story tended to get bogged down with exposition meaning you would leave the action at key points just to explain how some piece of equipment worked or explain the history of something which would end up having little relevence to the present situation. There was one moment towards the climax of the book where Audrey stopped to explain the material the walls of a particular building were made out of some fancy futuristic material that just baffled me and took me out of that exciting scene.

I didn't dislike Echo Boy, but it just left me feeling a little flat. There are some good action scenes in there, and I enjoyed the ending which provided a few last minute twists I thought were smart, and I thought Audrey's uncle made a great villain. I was perhaps just hoping for a little more.

Rating: 2.5*
Books like this: Cinder by Marissa Meyer, Hope's Daughter by Melanie Cusick-Jones