Review: The Incredible Adventures of Cinnamon Girl by Melissa Keil 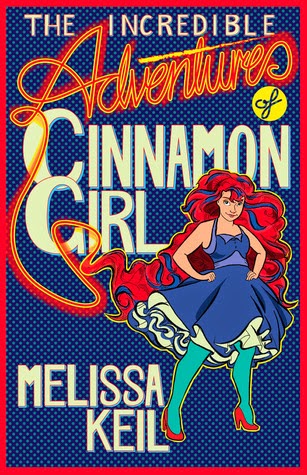 The Incredible Adventures of Cinnamon Girl
by Melissa Keil

Plot Summary (from Goodreads):
Alba loves her life just as it is. She loves living behind the bakery, and waking up in a cloud of sugar and cinnamon. She loves drawing comics and watching bad TV with her friends.

The only problem is she’s overlooked a few teeny details:

Like, the guy she thought long gone has unexpectedly reappeared.
And the boy who has been her best friend since forever has suddenly gone off the rails.
And even her latest comic-book creation is misbehaving.

Also, the world might be ending – which is proving to be awkward.

As Doomsday enthusiasts flock to idyllic Eden Valley, Alba’s life is thrown into chaos. Whatever happens next, it’s the end of the world as she knows it. But when it comes to figuring out her heart, Armageddon might turn out to be the least of her problems.

My Review:
So I adored Melissa Keil's first book Life in Outer Space and was so excited when I heard about her new YA novel The Incredible Adventures of Cinnamon Girl. I was dying to read it so when a copy of the book turned up for my birthday last month I was over the moon!

The Incredible Adventures of Cinnamon Girl follows comic book lover and illustrator Sarah Jane Albany, known to everyone as Alba, and her friends as they decide what to do with their lives now school is over. As if all that wasn't enough to deal with, a viral YouTube video about the end of the world has seen hundreds of people descend on Alba's small town causing chaos.

I loved this book, like absolutely adored it. And it's so hard to know where to start! I think Alba is pretty much the best thing about the book. She was such a refreshing character and felt a lot more relatable than a lot of the characters I've read. There's a confidence about her which is striking, particularly when it comes to her views on herself and her body image. It makes such a nice change to read about a female character who isn't obsessing about what she looks like or how hideous she is, but is so clearly comfortable in her own skin.

I could also relate a lot to Alba's frustrations when it comes to her drawing. Throughout the book she's working on sketches and comic strips featuring her character Cinnamon Girl, only she can't seem to find the direction she wants to go with it. I think anyone who's creative will be able to recognise that struggle to take your ideas and channel them into something. I thought it was really smart how Alba's challenges with her character kind of reflected what was happening in her own life as well.

I also loved the way Keil has captured those uncertainties you have about the future, which are especially prevalent when you're a teenager. There are so many choices Alba and her friends have to make, all of which will affect the balance of their friendship. I think we've all been in situations where change is on the horizon and you dread the inevitability of things being different and friends drifting apart, so you cling on desperately to the present where things are happy and comfortable. I thought it was clever how the addition of Daniel, someone from Alba's past, really helped shake things up and made Alba question things even more.

Then there's Grady, Alba's wonderfully sweet childhood friend. The two of them have a beautiful relationship which is really put to the test throughout the story. I adored Grady and the chemistry between him and Alba. I just couldn't help becoming completely invested with what happened between the two of them and was riding the ups and downs of their friendship right there with them!

Melissa Keil has also nailed the humour in The Incredible Adventures of Cinnamon Girl. When Alba and her friends were just hanging out, I felt like I was right there with them, sharing in the fun. The dialogue was so spot on and Alba's inner monologue kept me grinning throughout. The writing in general was amazing, from the little details like the food cooked at the bakery (it made you hungry just reading!) to these wonderfully developed characters you came to love and adore.

The whole storyline of the end of the world being just around the corner was something that really drove the plot on, even though it was just something in the background of Alba's mind.  Really the book is all about the characters, their decisions and how they're reflecting on their past as they start to plan their futures.

I can't recommend this book highly enough. I think everyone will find something in The Incredible Adventures of Cinnamon Girl that will make them look back at their own teenage years, or a time in their lives when big changes were happening, and stir up those feelings again. Spending time with Alba as she makes hers' was an absolute pleasure.